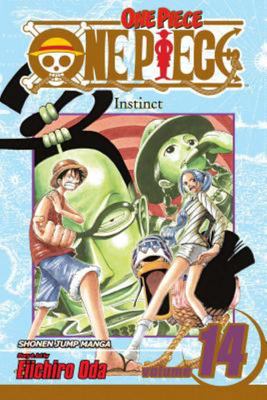 As a child, Monkey D. Luffy was inspired to become a pirate by listening to the tales of the buccaneer 'Red-Haired' Shanks. But Luffy's life changed when he accidentally ate the fruit of the Gum-Gum Tree, and gained the power to stretch like rubber...at the cost of never being able to swim again! Years later, still vowing to become the king of the pirates, Luffy sets out on his adventure...one guy alone in a rowboat, in search of the legendary 'One Piece', said to be the greatest treasure in the world...Someone has given Dorry the Giant exploding ale and he's not happy! Assuming it was Luffy and crew, he launches an all-out attack and is soundly defeated by the rubbery power of the Gum Gum Rocket! But a mystery is afoot - if Luffy didn't slip the giant the exploding brew, just who did?

Eiichiro Oda debuted in WEEKLY SHONEN JUMP in 1997 as a comic creator and artist with ONE PIECE. One of the most popular comic artists in Japan today, Oda started out by winning the Hop Step Award (a monthly award given by Jump for amateur artists) as well as the esteemed Tezuka Award. His art style is reminiscent of Akira Toriyama, Sergio Aragones, and the movie Yellow Submarine.