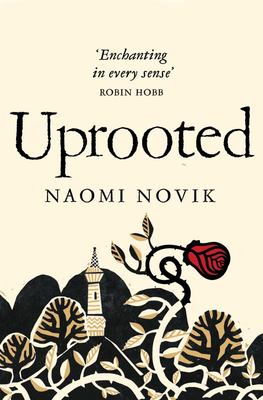 HUGO AWARD FINALIST - NAMED ONE OF THE BEST BOOKS OF THE YEAR BY NPR - BuzzFeed - Tordotcom - BookPage - Library Journal - Publishers Weekly"Uprooted is confidently wrought and sympathetically cast. I might even call it bewitching."--Gregory Maguire, bestselling author of Wicked and Egg & Spoon

"Our Dragon doesn't eat the girls he takes, no matter what stories they tell outside our valley. We hear them sometimes, from travelers passing through. They talk as though we were doing human sacrifice, and he were a real dragon. Of course that's not true: he may be a wizard and immortal, but he's still a man, and our fathers would band together and kill him if he wanted to eat one of us every ten years. He protects us against the Wood, and we're grateful, but not that grateful."

Agnieszka loves her valley home, her quiet village, the forests and the bright shining river. But the corrupted Wood stands on the border, full of malevolent power, and its shadow lies over her life.

Her people rely on the cold, driven wizard known only as the Dragon to keep its powers at bay. But he demands a terrible price for his help: one young woman handed over to serve him for ten years, a fate almost as terrible as falling to the Wood.

The next choosing is fast approaching, and Agnieszka is afraid. She knows--everyone knows--that the Dragon will take Kasia: beautiful, graceful, brave Kasia, all the things Agnieszka isn't, and her dearest friend in the world. And there is no way to save her.

But Agnieszka fears the wrong things. For when the Dragon comes, it is not Kasia he will choose.

"Uprooted has leapt forward to claim the title of Best Book I've Read Yet This Year. . . . Moving, heartbreaking, and thoroughly satisfying, Uprooted is the fantasy novel I feel I've been waiting a lifetime for. Clear your schedule before picking it up, because you won't want to put it down."--NPR
Promotion info
From the author of the Temeraire series comes this hugely imaginative, engrossing and vivid fantasy novel, inspired by folk and fairy tales. It is perfect reading for fans of Robin Hobb and Trudi Canavan.
Awards
Winner of British Fantasy Award 2016 and SFWA Nebula Award Novel Category 2016 and Locus Award for Best Fantasy Novel 2016. Shortlisted for Hugo Award: Novel Category 2016.
Reviews

Uprooted has everything I love: a great heroine, new takes on old myths and legends, and surprising twists and turns. A delight. CASSANDRA CLARE Uprooted by Naomi Novik is enchanting, in every sense of that fine old word. A charming and inviting story that looks unflinchingly at the strangling roots of hurt and revenge. -- ROBIN HOBB The magic in Uprooted, with its realistic moral dimension, is so vividly believable that it almost seems you could work the spells. But the book will do that for you. URSULA K. LE GUIN Magical and practical, otherworldly and planted in the real, I could NOT stop reading this book and neither will you! -- TAMORA PIERCE Wild, thrilling, and deeply, darkly magical. An instant classic. LEV GROSSMAN Uprooted is one of those tales you come back to over and over again because it's just that enchanting. The adventure builds with such tension that you are peeking through your hands at the end, hoping it will all be okay, and Novik delivers a conclusion that's deeply satisfying, earning a permanent space on my bookshelf that I'll revisit often. -- KEVIN HEARN Naomi Novik's Uprooted is a marvelous fantasy reminiscent of Howl's Moving Castle and vastly superior to The Hobbit. Her characters, setting, and the magic they use are all brilliant. I devoured the book in one reading. Well done! I want more! -- TODD MCCAFFREY The roots of Uprooted are planted deep in fairy tale lore, but the story that Naomi Novik has coaxed forth is fresh and compelling. It reads like a previously undiscovered origin myth in the best possible way! -- JACQUELINE CAREY Every so often you come upon a story that seems like a lost tale of Grimm newly come to light. Uprooted is such a novel. Its narrative spell is confidently wrought and sympathetically cast. I might even call it bewitching. -- GREGORY MAGUIRE

Naomi Novik is the acclaimed author of the Temeraire series. She has been nominated for the Hugo Award and has won the John W. Campbell Award for Best New Writer, as well as the Locus Award for Best New Writer and the Compton Crook Award for Best First Novel. She is also the author of the graphic novel Will Supervillains Be on the Final? Fascinated with both history and legends, Novik is a first-generation American raised on Polish fairy tales and stories of Baba Yaga. Her own adventures include pillaging degrees in English literature and computer science from various ivory towers, designing computer games, and helping to build the Archive of Our Own for fanfiction and other fanworks. Novik is a co-founder of the Organization for Transformative Works. She lives in New York City with husband and Hard Case Crime founder Charles Ardai and their daughter, Evidence, surrounded by an excessive number of purring computers.